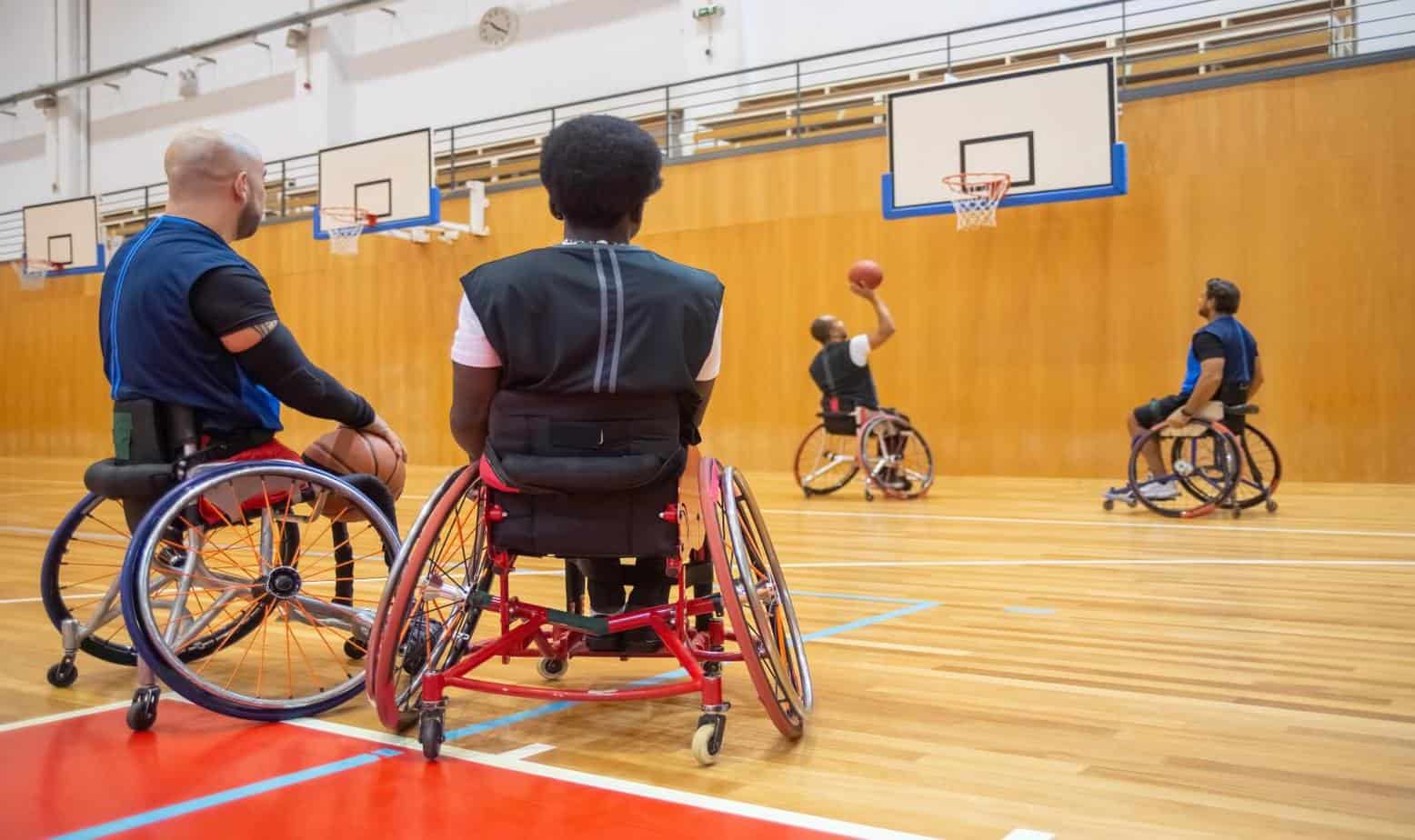 One of the common questions I get about using a wheelchair is how to play wheelchair basketball- or any sport for that matter.

It’s hard enough that you’re trying to move around without bumping in obstacles and not having people tackle you intentionally.

How do the professionals do it and make it look so easy?

You’ll learn all that today, so read on!

What is Wheelchair Basketball, Exactly?

Like the standard game, wheelchair basketball is a game of passion played at a fast pace with the objective being to shoot the ball into the opponent team’s basket.

It’s hard-hitting game with opponents clashing their wheels in order to disadvantage the player holding the ball.

The typical player is one who has a permanent leg disability or paralyzed in the lower body part severely.

The sport dates back to 1945. It was first played by USA World War II veterans in the administration hospitals in California and Massachusetts.

Later in 1948, the game became popular across different military bases. British war veterans at the Stoke Mandeville Hospital were also engaged in the sport.

In the year that followed, 1949, the first national wheelchair basketball tournament was held in Illinois, USA. Only six teams participated.

If you’re planning to go pro (rather than just playing a casual game with a few friends), you’ll need to understand classification.

Each player is classified upon their first appearance in a competitive game. They are observed in a training session. And then in actual competition games before a consensus is reached.

In wheelchair basketball, the main classification applies to players and based on their functional capacity.

Players are tested for their movement capacities in pushing, shooting, rebounding, pivoting, passing, and catching.

The ability to complete these tasks depends on your overall trunk movement. Stability and width of wheelchair also plays a major role as well. So, the test is not necessarily about skill but for the capabilities of the player.

When players are tested, they are classified majorly into any of four classes. With the disability rated from 1 to 4 in order of decreasing severity.

For players that don’t perfectly fit into any of the four main ones, there are .5 classes. These span from 1.5 to 4.5; with 4.5 being the least disabled. This takes the total classes tally to 8.

This point system comes to play during gameplay. At any point in time during a game, each time is only allowed to have a maximum of 14.0 points on court among the five players. This is called team balance.

What does it take to play wheelchair basketball?

Just like any other sport or game, there are specific needs required, from gaming equipment to protective gear to your actual wheelchair for outdoor use.

The type of wheelchair used in the basketball version is specially designed for sporting use only. They’re often quipped with a roll bar or special protective device to prevent floor damage.

So, in other words, a travel wheelchair won’t do.

If you’ve seen a basketball wheelchair before, you’ll notice the wheels are somewhat tilted outwards. This is great for control and balance.

The major specifications are on the dimensions of the wheelchair. Most important, the height of the seat from the floor must not exceed 21 inches.

Next is the height of the foot platform, which is the first contact, must not exceed a little below 5 inches from the floor.

Other specifications are based on the player’s peculiar needs. Seat cushions or weight foam rubbers are often used for packing the wheelchair back.

One last crucial part of the wheelchair is the heel strap. This is required to keep the players from major injury during hits. The strap must be at least one and a half inch wide.

Generally speaking, your wheelchair basketball outfit won’t look much different than what you see Michael Jordan wearing on the court, with one notable exception: the top.

Wheelchair users typically have more muscular upper bodies, and that must be taken into consideration in sewing.

The outfit must be one that allows free movement. Then it also has adapted seams, so that it would fit properly.

Other Materials You Need

There are several other pieces of gameplay equipment used in wheelchair basketball. The most important of these the ball type. Molten ball models are the most commonly used.

For training purposes, cones are often found at wheelchair basketball games. Scooters are also made available courtside as an alternative to wheelchairs.

How to Play Wheelchair Basketball?

Now we get to the heart of the titular question!

Overall, wheelchair basketball is played in a similar style to stand-up basketball. Though the rules differ a bit, the objectives of the game largely remain the same.

Learning how to play wheelchair basketball is all about mastering the skills required to get the ball into the net. Each player is positioned according to their strength.

Players that can dribble and move swiftly along are good for offensive play. The big guys that can track the opponent’s movement are great defensive players.

The most important position is still the point guard. This is like the team leader and should be the one getting the most points for the team. Followed by the shooting guard and so on.

The Rules of Wheelchair Basketball You Need to Know

The rules guiding the play of wheelchair basketball are quite different from the regular ones, but they are simple and can be easily mastered. I’ll break them down for you.

A team scores when they successfully dunk the ball into the opponent’s net. To score a goal, each team has 24 seconds. After that, they have to yield the ball to the other team.

There are three types of goals:

A dribble is done by wheeling the chair while bouncing the ball. Evasiveness is what makes this skill special.

If the ball player doesn’t bounce the ball and makes more than two pushes, then they have fouled for ball traveling.

As a base for setting the rules of wheelchair basketball, the wheelchair is considered as part of the player’s body. Hence, it is considered in judging a case of blocking, going out of bounds, or any other offense.

For the offensive player, a major rule is to not remain in the key area for more than three seconds. They must almost always be on the move.

During gameplay, no player is allowed to use their legs, either to gain an advantage instability or to get control of the ball. That’s why it’s best when you have your legs strapped.

If a player falls out of their chair, the referee would only stop the game when the player is at risk of being injured.

A wheelchair basketball game lasts four periods of 10 minutes each. In the event of a tie, five minutes of overtime gets added. Additional overtime might come up until there’s a winner.

The team composition runs to about 12 players per game. However, only five players can be on-court at a time, with a maximum team point of 14.0.

After each 10-minute period, the teams are entitled to a 60-second time-out. Any team that requests a time-out outside these periods is charged a technical foul. Extra time-outs are allowed during overtime.

How to shoot a basketball in a wheelchair?

With the ball raised up high, extend your back and shoulders. Stretch your elbows, then with a flex of the wrist and fingers, the ball is released to the highest point towards the net.

What is the Paralympic basketball wheelchair size?

The average paralympic basketball wheelchair size is 24 inches wide. The wheelchair dimensions would be fitted for each player.

How long is a shot clock in wheelchair basketball?

A wheelchair basketball shot clock counts down from 35 seconds. During the final moments of the game, the team with the ball has a shot at the basket.

When it is considered out of bounds in wheelchair basketball?

A player is considered out-of-bounds in wheelchair basketball when any part of their body or the wheelchair crosses the court boundaries.

And that’s a wrap! By now, you know all you need to know about how to play wheelchair basketball.

If you’re interested in the game, find a facility around you to visit and talk to others who already play there. The ball is in your court.

Have more ideas on how to play wheelchair basketball? Share below!

12 thoughts on “How to Play Wheelchair Basketball: Rules & Requirements”